Autumn is my favorite season. I love the chill in the air; I love the contrast between the bright blue sky and Mother Nature’s muted colors; I even love the cool, earthy and slightly damp way the world smells. Around this time each year I’m typically elbow deep in end of the season garden veggies; namely peppers, tomatoes, onions and eggplant. But not this year. This summers garden was a serious bust. I gave it just as much love as I ever do and the meager amount of veggies it produced was beyond disappointing. Sure my cucumber plants grew so voraciously we were eating cucumber with nearly every meal, but I got exactly two habanero and six bell peppers, the yellow and acorn squash flowered but then nada, the radishes and beets were nothing but greens and the tomato plants grew taller than me but only offered up a few handfuls of fruit. It broke my heart. What did truly flourish and produce in abundance were the tomatillos. The plants were so tall and willowy they resembled trees and each was covered stem to stern in little paper-thin green lanterns that would later be filled with the tomatillo fruit. It was the bountiful harvest I had been longing for. So you may be wondering, what did I do with all those lovely tomatillos? Well… I ate them sliced in salads and as a garnish for tacos. I made an insanely spicy Salsa Verde and I threw a handful in with some heirloom purple tomatoes for a kooky homemade pasta sauce. And I made soup.

Ours is a house of soup eaters, in fact my daughter is so crazy for soup that she’ll frequently request the leftovers for breakfast. No problem… In my mind there’s nothing like a warm comforting bowl of some homemade goodness to make a chilly Fall day (or morning) seem downright toasty. Believe it or not I’ve actually been planning for my first pot of Fall soup for a few months now. I know, seems a little crazy right? But it’s not really. You see my husband really honed his smoked beer can chicken technique this past summer. What started out as a good recipe in June turned into a killer recipe by August. It was so good that beer can chicken was the meal requested by my son’s friend the night he slept over. (And you know when a super picky 10 yr old requests one of your recipes it must be good!) Anyway, to ultimately get to this poultry of perfection recipe he made beer can chicken fairly frequently— sometimes as often as two weekends in a row. Mind you I’m not complaining, just explaining that we had a considerable amount of leftover chicken in the house and one can only eat so many chicken salad sandwiches! So, I decided to quietly squirrel away some of the leftover bits in the freezer in anticipation of that first pot of soup.

Fast forward to a chilly day in September, a day that begged for soup. Into the pot went some onion, a green pepper and a bunch of those lovely tomatillos. Out of the freezer came my carefully rationed chicken and an hour later… into our belly’s went some of the tastiest soup ever to come out of my kitchen.

And yes, my littlest love did in fact have a bowl of it for breakfast the next day. 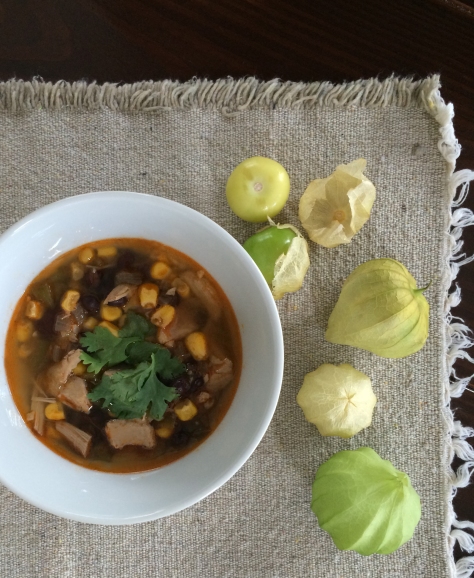 Smoked Beer Can Chicken Soup
Any sort of leftover chicken will do but the smoked beer can really brings a nice flavor to the party.