butter [buht-er]:
An edible whitish-yellow solid made from cream by churning, for cooking and table use. ~ To apply a liquefied bonding material to (a piece or area), as mortar to a course of bricks. ~ “To butter up”; to flatter someone in order to gain a favor. ~ “Look as if butter wouldn’t melt in one’s mouth”; to look innocent, although probably not so.

Butter. You probably don’t give it all that much thought. Yeah me neither, until recently that is. As I mentioned in an earlier post I bought the cookbook “Make the Bread, Buy the Butter”, which I’ve been enjoying flipping through. But as much as the title made me chuckle it also made me think, “But why not? Why shouldn’t I make the butter?” My son (who’s 7) has made butter at school a handful of times, so I don’t imagine it could really be all that difficult. I made a mental note to give it a try one of these days.

Have you ever had one of those afternoons where you feel like you’ve spent more time thinking about everything you need to do, rather than doing it? Thursday was one of those days and before I knew it the day was half over and I still didn’t have anything in the house for dinner. I made a mad dash to the store but with my limited amount of time was forced to buy bland grocery store Italian bread rather than the good bakery stuff. I hate having to settle for bland and mediocre! Not one to be undone by something as silly as bread, I seized this as my lemonade out of lemons opportunity to see what homemade butter really was all about. Could it possibly turn this hum-drum loaf of bread into something you’d actually enjoy eating?

It turns out making butter from scratch is not hard to do at all, especially if you have a food processor. Yes I know, you’re rolling your eyes because who but a crazy person with too much time on their hands would bother to make butter. But hold on a second. It took me all of 10 minutes to turn a little heavy cream into the tastiest butter you’ve ever spread on a slice of bread. Honestly, 10 minutes and a lifetime of difference between anything you could buy at the store. And when I tell you this homemade butter was good, I mean “oh my god” good, “I will always remember this moment” good, and “how can this be legal” good. Yeah, it’s really that good!

Oh, and that lame store-bought bread? There wasn’t an un-buttered crumb left.

Homemade Butter
I added a bit of salt to my finished butter, but you can leave it out if you prefer a sweeter result. I also understand that homemade butter will keep in the refrigerator for up to 2 weeks, but my family polished ours off in two days. 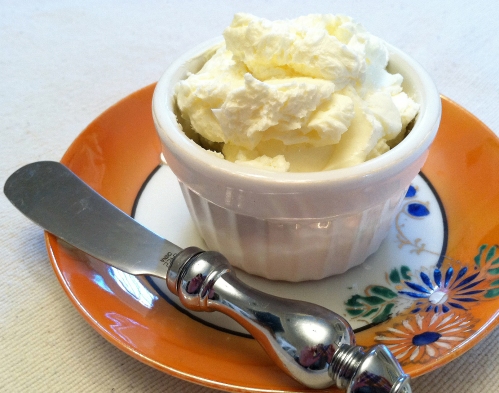 *adapted from my earth garden