My kids consume a tremendous amount of fresh fruit. Believe me I’m not complaining, just stating a fact. (The joke in our house is that if you go to the grocery store you better come home with a gallon of milk and some sort of fruit!) The other day the three of us went to a local produce market and loaded up on pineapple, pears, peaches, plums and a watermelon. Enough fruit to keep the average child busy for some time, but mine are not your average children. In no time our fruit bowl was once again beginning to look bare, although the watermelon remained untouched in our second refrigerator. The next time I went to the grocery store grapes and bananas happened to be on sale, so naturally I picked a few up. Then we decided to take advantage of the beautiful weather and day off from school to do a little apple picking— 18 lbs. of gala apples later we headed home. It was apple mania, the kids talked about the applesauce and apple pies they hoped to make and ate at least a dozen apples each over the next few days. And still that poor watermelon sat in the fridge, lonely and unwanted. As they slowly emerged from their apple stupor the weather just happened to get hot again. “Perfect Indian summer watermelon enjoying weather,” I thought and offered one final time to slice it up for them. I was once again waved off. So, as any no-nonsense mother will do, I decided to take matters into my own hands.

Over the summer while researching what ultimately became my grilled shrimp and watermelon salad I had stumbled upon a recipe for watermelon jelly. I have to tell you, I’ve never considered watermelon as the ideal jelly ingredient but, since I’m relatively new to the whole jelly/jam making process I assumed the cookbook author knew better than I. The fact that the recipe called for Pomona’s Universal Pectin, the type of low-sugar pectin I’ve used in the past, clinched the deal. Of course I took a few liberties with the recipe; namely leaving in the pulp which essentially changed the results from a watermelon jelly to a watermelon jam.

The jam was delicious, not too sweet with a delicate watermelon flavor. In my opinion this is the type of jam that you serve as part of a cheese plate or with a dollop of goat cheese on a cracker. My children however liked it on their morning toast and as the “j” in their pb&j’s. “Okay”, I said “Knock yourselves out”… who am I after all to argue with theses fruit aficionados?

Watermelon Jam
This is more of a refrigerator jam and not a properly “canned” jam. You certainly can put the jars in a water bath and seal them for shelf storage, I however chose not to. 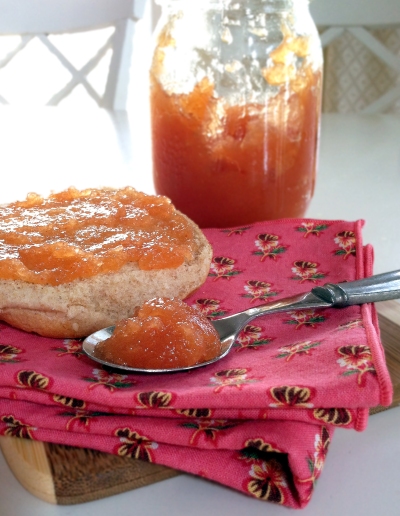 *adapted from put ’em up!

3 thoughts on “in a watermelon jam”