Have you been outside recently? It’s gives new meaning to the phrase “It’s colder than a witch’s tit in a brass bra!” Seriously, it’s the kind of cold that makes you want to pack the family up and buy a beach shack in Fiji. (The cost of living has to be better than New Jersey and think of all the tourist worthy souvenirs the kids will learn to craft out of coral and palm fronds!) Yup Fiji definitely seems to be the way to go, but until those change of address cards hit the mail I’ve been doing my best to keep the family warm with knit hats, flannel pj’s and giant comforting pots of hearty soups and stews.

I’ve been the butcher, baker and candlestick maker behind the famous (or is it infamous) beets and blue cheese dot com for three plus years, and in that time I’ve posted twenty-three recipes in my soups and stews category. Twenty-three… that’s a lot! I’ve given you everything from Fish Chowder with Bacon and Butternut Squash to Slow-Roasted Tomato Bisque. Homemade Wonton to Curried Carrot & Parsnip. Creamy Broccoli & Kale to Cold Cucumber and Potato. Not to mention recipes for Chicken Stout Stew, Turkey and Bean Chili or good ol’ Classic Beef Stew. And with each recipe I suggest you serve it with homemade rolls or rosemary soft pretzels, bialys or blue cheese crackers; something wonderful and freshly baked. Usually I take my own advice and bake something yummy to serve on the side, but recently I’ve been feeling restless. I’m tired of the same old drop biscuits or cornbread, I want adventure!

Back in the day popovers were my thing to make at Thanksgiving. They seemed fancier than your standard roll, required special equipment (something this new cook was happy to go out and buy) and made everyone ohh and ahh when they came out right. When being the operative word. I’m still not positive which recipe I was following, my guess it was it mash up of two, but while they worked like a charm one day they were a giant flop the next. Annoying, aggravating and enough to make this gal shelve her popover pans for years. I came upon those pans the other day and since I happened to be feeling invincible, decided it was time to give them another whirl. However this time I went directly to the source; King Arthur.

When it comes it baking the folks at King Arthur really do seem to know a thing or two. They have blogs and hotlines, recipes and communities, products and classes… they are the undoubtedly the end all and be all of baking information. My family and I actually visited the King Arthur Flour Vermont campus this past summer and honestly if they would have agreed, I would have moved in. It’s an amazing place filled with baking, eating, learning and buying opportunities all set in the beautiful Vermont countryside. A total baking mecca. Anyway back to those popovers— According to the baking gurus at K.A. the ultimate popover is in fact not the result of starting them off in a cold oven, nor does it matter if you use a blender or whisk the batter by hand. No according to them it’s the temperature of your ingredients that are the key to perfectly puffy popovers. Interesting. So armed with some fresh popover baking advice and a King Arthur recipe I focused my attention on baking up a batch of my own. And guess what? Perfectly puffy popovers!

Super Simple Popovers
These are truly so easy to make you’ll find yourself enjoying popovers all the time. 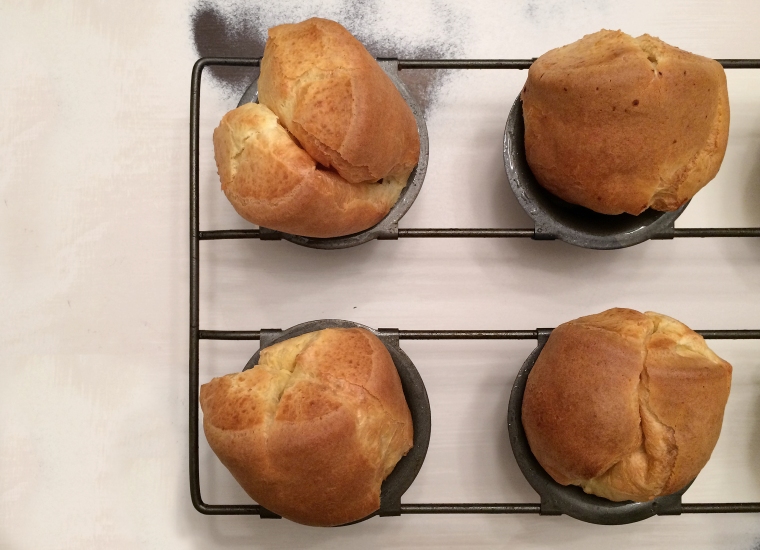 *I’ve experimented with several types of fat to grease my popover pans including butter, vegetable shortening and bacon grease. The bacon grease seemed to work the best, followed by the butter. But you be the judge.