The most highly anticipated day of any football lovers year is right around the corner. Frankly, I don’t like football. Nope, not at all. Sure I’ve been to Giants games. Sure I’ve drunk beer, eaten pretzels and cheered for big blue. Sure I’ve asked “Who’s winning?” on many a Sunday afternoon. But in all honesty, there’s nothing about the sport that appeals to me. However I realize I’m in the minority (particularly at this time of year) and so I make an effort to pretend to care.

I had planned on this years effort manifesting itself as some out of the box delicious Super Bowl Sunday treat. I would tell you a long-winded story about it, give you the recipe and close the book on yet another football season. But karma got in the way. You see last week I was busy bragging to anyone that would listen about how my entire family was sick but me. And how I fully attributed my reigning health to the super green smoothies I drink everyday. The universe is a funny thing. Don’t let it see you getting too full of yourself or before you know it… playing fields will be evened. (Did you catch that little hook back into football? I know, I’m good.) Anyway, the universe is now having a nice little chuckle at my expense because this week I’m living on Jakeman’s cough drops and sound like Harvey Fierstein. Yeah, karma really is a bitch. Instead of giving you something new and fabulous, I’m reposting last years Super Bowl entry along with my recipe for Grilled Asian Wings— and I’m going to make myself a cup of tea.

So until next season… May your teams be tough and your balls fully inflated!”

PREVIOUSLY POSTED ENTRY: It seems to me that Super Bowl Sunday has very little to actually do with football and a lot to do with Clydesdale commercials, half-time wardrobe malfunctions and trashy food you would never ordinarily consider eating. You know the kind I’m talking about— bowls of melted velveeta and salsa served with Fritos (hmm, who knew they still made Fritos?) piping hot pizza bites and mini hot dogs (I’m sure there’s not that much MSG in them, right?) and of course deep-fried wings with a side of bottled blue cheese dressing (limp celery stalks optional). But before you get the wrong impression here’s the thing… I happen to like wings. In fact there’s a coal-fired pizza joint nearby that makes the most delicious caramelized onion and rosemary wings that I like to order with a side salad. So you see it’s not the wing itself I take issue with, it’s the prepackaged, deep-fried, preservative laden aspect of your typical trashy wings I dislike. If I’m going to eat a wing I want some thought to have gone into it, some consideration for the flavors in combination with the cooking method. I want someone to have given that wing a little love long before it ever hits my plate.

While I don’t have a coal-fired pizza oven, I do have a gas grill and a Weber cookbook, which as it turns out is all I really need. A few pounds of wings, some Asian ingredients, a little grill time and voilà… Delicious without apology wings. I realize as I type this that the temperature outside is only 18°F, not exactly standing at the grill weather. I have but one thing to say about that—

Toughen up buttercup. This is football!

Grilled Asian Wings
These are delicious and far less guilt inducing than your typical wings. 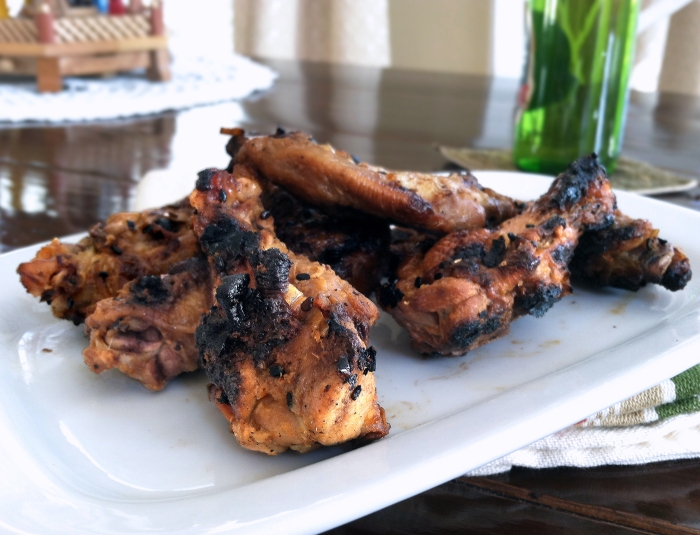 3 thoughts on “winging it… again”

Leave a Reply to Helen at Casa Costello Cancel reply