Risotto, that sublime Italian rice dish with a reputation for being incredibly time consuming and fussy. In reality it’s really pretty simple to pull together. Hot broth in one pot, toasted arborio rice in another. A wooden spoon, a bit of butter and cheese. A smidgen of patience and buon appetito!… Risotto like you thought you could only get in a restaurant. Yes the spoon has to be wooden (so as to not damage the grains of rice). Yes the broth has to be warm (it’s more easily absorbed than cold stock). Yes you need to stir the rice almost constantly and it needs to be served IMMEDIATELY or it becomes dense and gluey. But that’s a small price to pay for a creamy, rich and luxurious dish of perfect risotto.

In the words of chef Jamie Oliver “Risotto… It takes a bit of time and a bit of love. In life, you can’t have everything in one basket.”

Simple Shrimp Risotto
You can get fancy and add asparagus or sweet peas to this risotto, but it’s perfectly perfect without it as well. Abbondanza!

*To create shrimp stock I simply placed the shrimp shells and some water in a small saucepan and allow it to for for an hour or so. Strain the liquid and voilà— shrimp stock.

**adapted from the reluctant gourmet

A few weeks ago my daughter discovered the classic children’s book The Poky Little Puppy. It’s been her number one choice for afternoon reading and bedtime story ever since. She never tires of hearing about the puppies heading roly-poly, pell-mell and tumble-bumble down the hill. She tisk-tisks when the fresh puppies get scolded by their mamma and is delighted when the poky puppy gets to eat up all the rice pudding and chocolate custard. But I’ll be honest with you, The Poky Little Puppy is beginning to get on my nerves. Seriously, the same book every night for weeks on end— I challenge you not to grow weary too! But she loves the story, so we read it again and again and again. Anyway, thanks to a certain little puppy I’ve been thinking about rice pudding lately.

In my mind there really is no middle ground when it comes to rice pudding, you either love it or you don’t. And the same goes for whether you prefer it with raisins or you think it’s at it’s best unadulterated. Personally I can’t think of a more soothing dessert than a bowl of rice pudding (without raisins) topped with a nice dollop of whipped cream. Mmmm…

In the past I’ve made rice pudding with brown rice and coconut milk, and while it wasn’t bad it certainly wasn’t the rice pudding you remember from childhood. But this recipe is. It’s rich and creamy and not overly sweet, really it’s near rice pudding perfection with one exception… it only makes a small quantity of rice pudding! Now perhaps in your house this isn’t an issue, but in mine things could get ugly pretty quickly if someone feels they haven’t gotten their fair share. Naturally my solution was to double the recipe which not only made enough to satisfy the crazies I live with, but also gave me enough to share with my visiting parents. Happiness reigned! Oh and that night my mother got the pleasure of reading The Poky Little Puppy to her granddaughter before bed. It was a win-win situation all around…

Classic Arborio Rice Pudding
When it comes to rice pudding my family is a bunch of purists. In other words— no raisins, ever! But feel free to add them to yours if you wish. 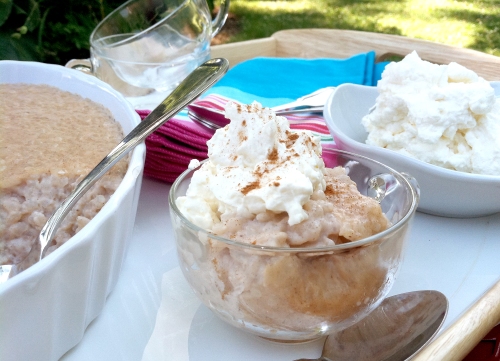 *adapted from the food network

Homemade Whipped Cream
It’s so easy to make your own whipped cream it’s really not worth wasting your time (and money) buying it.